Cookies help us deliver our services. By using our services, you agree to our use of cookies. More information

The HGP, which stands for Honest and Green Party is a green, left-wing political party in WolvHaven. It's headquarters are located in Fifth Haven. Since 31 March 2017 at the start of the party, it's leader had been autobus22 until his resignation prior to the May 2020 Election. Upon autobus22's resignation, SirKiwi_ was elected by party members to become the new party leader. The party's advocacy is for an equal and honest system of law and mediation which is practical to enforce and abide by, a better player environment for all players and the awareness and concern for the environment. We seek to take a progressive approach to social and political policies and we make sure to discuss subjects within the party collectively to create an accurate and fair stance on subjects based on collective discussion.

Greyscale version:
While not as beautiful, This one is more accessible to those with vision problems.
https://drive.google.com/file/d/15NRdrrVWnzS61vSGshGlxkpM3qZp1WNB/view?usp=sharing 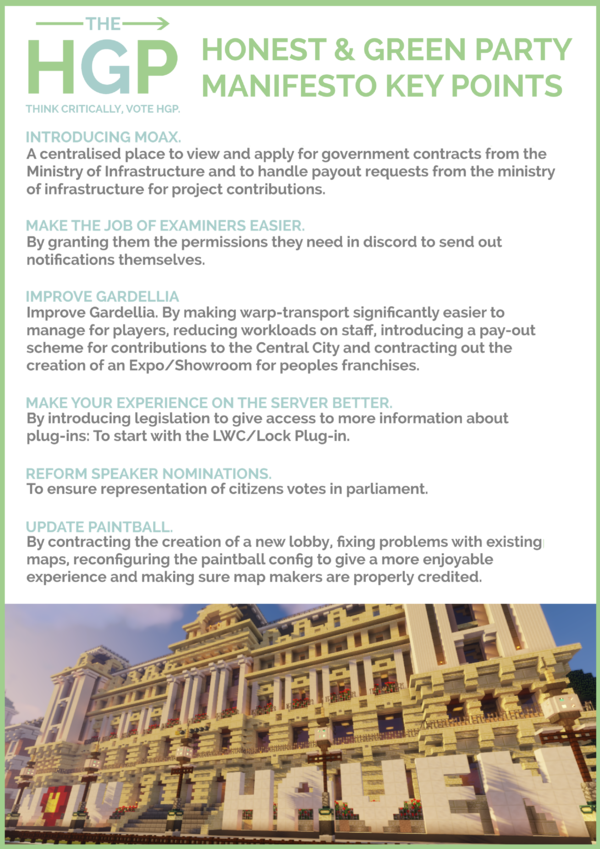 (Order is provisional and subject to change before the election.)

A listing of all votes

Notice: This may not be 100% up to date. Bold text indicates a bill tabled by a party member

We have had no MP's during this time.

Note: Bills where no history is in Parliament Papers nor critical parts of the vote remembered by autobus22 are excluded. (Also note some of these are up to three years ago, ideologies do shift slightly. We provide older data as a form of transparency, not as an accurate measure of our ideologies, for that look at the HGP's own votes.) Also note: though I tried my hardest to create an accurate list, memories aren't always accurate.

NOTE: This included only a single session according to records.